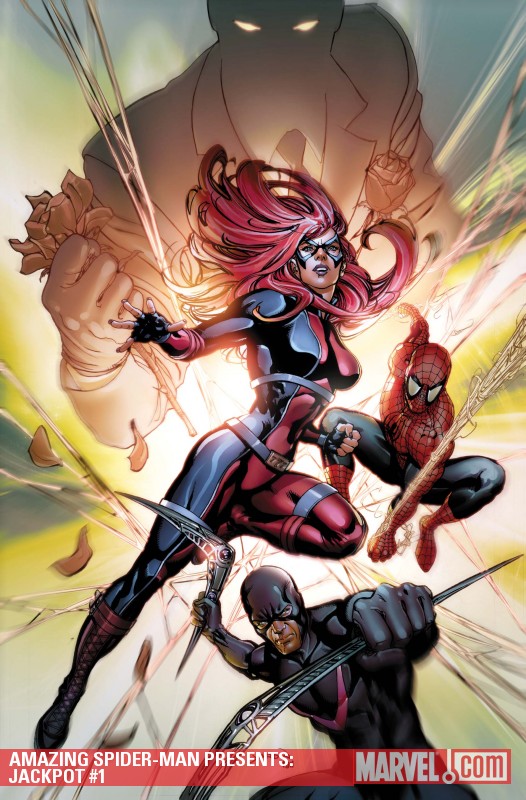 As the title suggests, this story features the life of Jackpot, after she and Spider-Man last met, somewhere towards the beginning of Brand New Day.

The former, but second Jackpot - Alana Jobson, whom reminded Spider-Man of Mary Jane, died, soon after she was introduced.


The story begins with the original Jackpot, Sara Ehret, thinking to herself how Spider-Man guilted her into wearing the Jackpot Mantle, after the death of her friend Alana. Sara, now wears the Jackpot costume, with some color modifications taking care of small time baddies. That night however, she runs into her first super villain - Boomerang. After, barely escaping, she makes a run for it, with a bottle of something, that the bad guys were trying to smuggle. The story then shifts to here personal life.

Sara lives with her husband and daughter, and works in a lab - one of Oscorps subsidiaries, during the day. The next day, at the lab, Sara gets help from her colleague, Dr Hayes, to find out what the bottle contained. Apparently it contained a sweat gland.

While in the lab, Sara recalls how she got her powers. In lot 777, Sara had an accident while trying to create a cure for parkinsons. Obviously, the accident gave her the super strength. The rest of the story involves Jackpot trying to find out more about the sweat gland.

The first issue ends with the bad guys, led by The Rose, determining Jackpot's identity thanks to her fingerprints on the grappling hook she shot into Boomerangs check earlier in the story.

The second story starts with Jackpot, continuing to beat bad guys to find out more about the sweat gland. Spider-Man jumps into the picture somewhere along the line and helps her. After beating White Rabbit and and some other thugs silly, Sara asks about the small bottles all over the floor.White Rabbit tells them that its a drug called Ebony. Not being able to make sense of it all, Spidey advises Sara to see Reed Richards.

Reed then explains that this is the second sweat gland he has tested. The first was brought in by Daredevil, but had been compromised as The Owl was trying to turn it into a drug. With his database of superhumans, Reed identifies the sweat gland's owner - The Corrupter, a guy that can make you do what he wants you to by touching you. Reed also explains that extracting the sweat gland would be extremely painful, and that it is unlikely the Corrupter would do so willingly.

Putting the two together, Sara concludes that the Ebony was the end product of what the Owl was trying to do with the Corrupter's sweat gland. At the end of the issue, Boomerang has been given orders to take out Jackpot. Boomerang appears at Sara's house at night and kills her husband. The issue ends with him about to kill her daughter.

Jackpot # 3
This issue starts immediately where the last issue let off. To cut it short, Sara manages to protect her daughter and kill Boomerang, so it seems. She then runs to the Fantastic Four and leaves her daughter to be safe there. As Jackpot, she spends the night beating every crook she sees to get information, on who ordered the attack.

Spidey appears halfway after receiving news from Johnny Storm about Sara. The two galavant more until they finally get a lead - The Rose. The two barge into The Rose's base, only to find themselves greeted by Armadillo - a really huge guy.

Jackpot gets thrown out the window while Spider-Man gets to see the The Rose face to face. I'm not sure how Spidey got free, but he is next seen helping Jackpot take on some 'drugged' crooks. Jackpot is finally met for the last time with Boomerang, who apparently didn't die.

After almost losing her life, Jackpot defeats Boomerang and is able, with Spider-Man's help to control herself from killing him. The issue ends with the Rose in custody. It is revealed that he is actually Dr Hayes. What a let down. Sara and her daughter are last seen practicing their new names. Sara changes her name to Alana Jobson.


I have a few thoughts about this issue. Firstly, how on earth did Spider-Man manage to escape from both the Rose and Armadillo? Second, at the end of the issue, the Rose is caught, but Armadillo is missing. Finally, Dr Hayes was just too lame to be the Rose. Poor ending.
Read More

With Siege turning the Marvel Universe upside down (or rather, right side up) not a lot of attention is being paid to Brian Michael Bendis' other four issue miniseries set in the Ultimate Universe. Since we will be waiting a while for the last issue of Siege, let's get our monthly Bendis/event fix here... 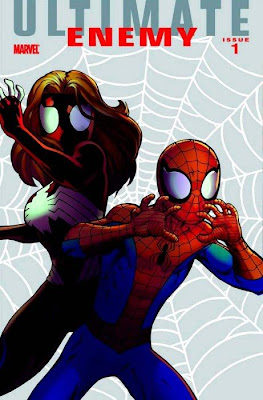 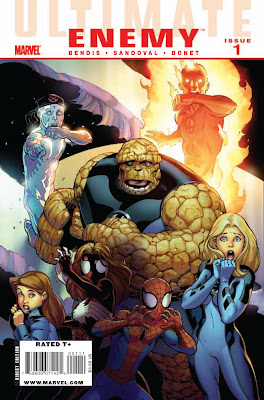 It starts with Spider-Woman having an inner monologue about wanting to take down the Roxxon corporation. The Roxxon building is then attacked by a mysterious organism. She attempts to save everyone she can, but the building quickly collapses.
Thanks to the events of Ultimatum, Reed Richards now lives at home with his family. He detects an energy flux on his computer just as someone arrives at his door. Just as Reed's father is about to answer it the house explodes.


Susan Storm heads to the Baxter Building (she's the only one who still lives there) and finds Ben Grimm waiting for her. After Ultimatum, Ben joined the military and did quite well for himself. Since Sue and Reed broke up a while back, Ben decides to tell Sue that he loves her. Sadly, she does not feel the same way and Ben leaves distraught. Just as he exits the building it comes under attack by the same organism that attacked Roxxon. Ben attempts to fight it but the organism knocks him across town.
In Soho, an undercover Nick Fury is trying to enjoy his lunch when he is attacked by a purple "alien" (presumably responsible for the other attacks). The alien claims that Fury brought this upon himself... 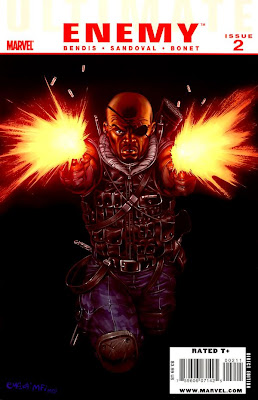 Spider-Man and the Human Torch witness the attack on Fury and come in to help him. Outnumbered, Fury's attacker disappears. The Torch then notices the attack on the Baxter Building and rushes across town to help his sister.
At the Baxter Building, Ben once again attempts to fight the organism. The Torch arrives and flies into the wreckage to save Sue, who has kept herself alive with her invisible force field. The organism then disappears along with the top half of the building. Sue was able to collect a piece of the organism and intends to show it to Reed.
Spider-Woman swings into her apartment just in time to see news coverage of what happened to the Baxter Building. She is then attacked by the same creature who attacked Fury but manages to escape.
Sue, Ben and Johnny are standing outside what is left of the Richards' residence. A police officer tells them that nobody made it out. Spider-Man arrives and Johnny fills him in on the situation. Realizing that nobody was supposed to know where Reed and Fury were, Spidey phones his house to warn Aunt May. Unfortunately, Fury's attacker has already appeared outiside his house.
Ultimate Comics Enemy #3
At the Triskelon, Carol Danvers is desperately trying to figure out who is responsible for the attacks. She puts everyone on full alert and declares martial law in New York City. She then heads to the bathroom to compose herself when she is confronted by Fury. Fury suspects that Danvers is behind the attacks. Danvers denies the accusations and engages Fury in combat. They are interupted when one of Danvers' agents informs them of the attack on Spider-Man's house. 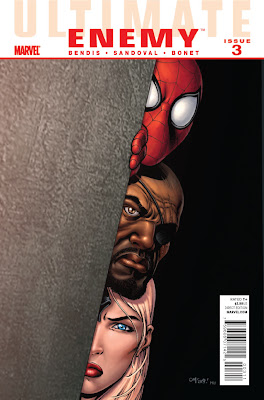 Luckily for Spidey, Bobby Drake a.k.a. Iceman is now a resident at his home. He manages to buy enough time for Aunt May and Gwen Stacy to flee the house unharmed. Iceman manages to hold his own against the alien until Spider-Man and the Fantastic Three arrive to provide him with back up. Using her forcefields, Sue manages to beat the alien into submission. Just then Danvers and a strike team arrive on the scene. Danvers attempts to question the alien but it disappears. It is then that everyone notices that something strange, and presumably bad, is happening to the Thing (who got hit by an energy blast earlier in the battle)...


Thoughts
I was skeptical of this miniseries when it was first announced. Another big event for the Ultimate Universe so soon after Jeph Loeb tore it apart in Ultimatum? Thankfully, Enemy is much better than Ultimatum.
What I like about Enemy are all the great character moments and sequences Bendis places in the book. The scene where Ben pours his heart out to Sue in issue #1 was heartbreaking. Another great moment was the confrontation between Danvers and Fury in issue #3. Another strong aspect is the artwork. Rafa Sandoval really knocks it out of the park in these three issues with both action sequences and the quieter moments.

My main complaint would be that the antagonist is not very interesting. Three issues in and we still do not know anything about him. I am sure the last issue will yield some answers, but I was hoping that Bendis would give us a few more hints as to who the purple guy in the lime green armor is.

Ultimate Comics Enemy has proven to be an entertaining mini thus far. All of Bendis' strengths are on display here, backed up by some great artwork. But is this mini worth picking up for Spidey fans? Spidey has not had much time to shine thus far. Much like his New Avengers appearances, he seems to be along for the ride, spouting the occasional quip to remind us that he is there. Iceman managed to save his family and his house, so there are no major developments that would force a Spider-Man fan to pick this book up.