Ever since the OMIT guitar pick giveaways at the recent Emerald City Comicon, people have been speculating what exactly OMIT was all about. Some thought it was about X-Men while most thought it could be Spider-Man. Obviously, since it is on this website, we now know it is about Spider-Man. And so, with this latest image ( the second one) released, we now know for sure that OMIT will more than likely be the relating story to the most controversial event in Spider-Man history - One More Day. The story, as can be seen from the image will be released in July in Amazing Spider-Man 639.

Why is Spider-man in his black costume in the wedding cake? Hopefully this coming story will answer a whole lot of questions, and be more interesting than the Gauntlet. Please feel free to add comments..

More recent news reveals in an interview with Quesada that there were events that took place from the moment the deal was made, to the first scene in Brand New Day. There were untold stories to fill the blanks, not previously told that will be revealed, starting from Amazing Spider-Man 637-640. It is also strongly suggested that the whispered deal Mary Jane made to Mephisto will be addressed.

*Edit* I'm sorry, this is the second time I'm editing this post. Reason for this being that there is a new OMIT teaser image up on the web as shown below. Thanks IGN. 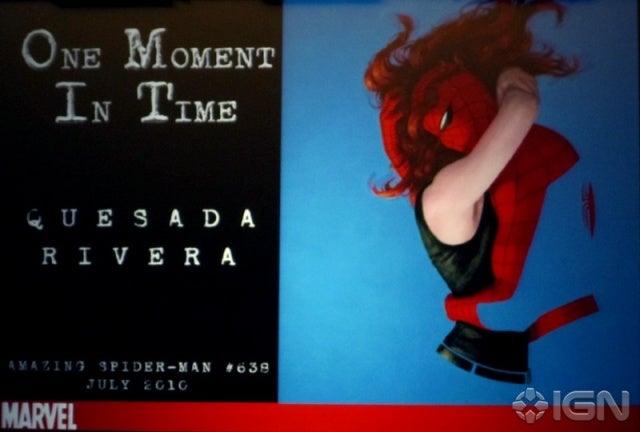