The story- Amazing Spider-Man 327
Making this review really short, summing three issues together, the story starts with Spider-Man Showing off his new powers to his wife, Mary Jane. Spider-Man mysteriously started to develop new powers, such as being able to control his webbing with his mind.

He has also started being attacked for no reason by random characters for no reason since this new development. Obviously these attacks were planned by four powerful crooks - The Wizard, Magneto, King Pin and Dr Doom.

After some short discussion amongst the bad guys, Magneto decides to take down Spidey. Magneto has his personal motive, sensing  that Spider-Man is mutating, and wants to recruit him.

Magneto finds and battles Spider-Man, who is continuously learning new powers, such as enhanced Spider strength, and super hearing. He finally decides that Spider-Man is no what he was looking for when he is suddenly able to fly.

Amazing Spider-Man 328
In the next issue, Spider-Man is attacked by Grey Hulk - who agrees to fight Spider-Man for a large sum of money. From the cover (above)however, it is quite obvious what happens. In this issue, Spider-Man also develops the ability to shoot light from his eyes. (Probably a laser of some sort )

Amazing Spider-Man 329
In the final issue, Spider-Man is attacked by Graviton again, (First time in ASM 326) as well as Tri-Sentinel.Spider-Man does not have time for him and blasts him away with some laser beams from his hands.

Upon doing so, he transforms into Captain Universe and suddenly obtains all sorts of memories. Captain Universe is an Enigma force who chooses a champion as his host whenever grave danger faces Humankind.

After a long dramatic fight between Spider-Man and the Tri-Sentinel, he somehow uses all his power and blows up the robot. Spider-Man finally awakens, without his extra powers, fully restored to normal.

He is obviously happy and relieved that he no longer has such a heavy responsibility with the super powers he previously possessed. He returns to his wife to have an almost normal evening.

I say almost because, throughout the three issues, MJ and Peter have been patient enough to go on double dates with Flash and his many girlfriends. Flash is obviously having trouble finding a good girl. The issue ends with Flash bringing his latest development to the Parker's home - Felicia Hardy.

It is pretty strange, yet refreshing to read an issue where Mary Jane and Peter Parker are married once again.
Unlike in the Brand New Day story, where Mary Jane supposedly broke up with Peter because she could not stand the danger he was putting himself in. ( Amazing Spider-Man 605 ), the Mary Jane here is much different as can be seen from the scan below.

Well obviously Peter is back to square one now, with no wife to help him by.
Read More

Spider-Man is an X-Man?

So, Marvel just released a teaser image that simply does not make any sense. In the image Psylocke and Spidey are bursting out from a poster. As we all know, X-men are a bunch of mutants, and Spider-Man is no real mutant.

Looks like we may have another title to review if Spidey ends up in the X-Men. 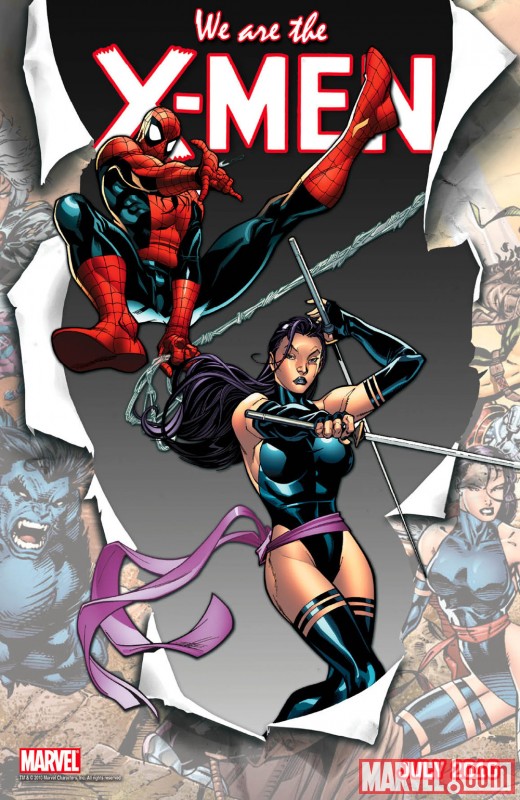