Wondering how Spidey will ever be able to handle Captain Universe, a super cosmic power dude who just took out the Juggernaut? I came across some interesting news regarding Amazing Spider-Man 628, I decided to post it here as well.

Below are abstracts of an article by Marvel.

"The intriguing thing about Captain Universe is that he-or she-could be anybody," Stern explains. "There's an extra-dimensional Enigma Force that can empower anyone, even you or me, and transform them into Captain Universe."

"Spider-Man is going to be preoccupied with trying to keep himself and Juggernaut alive, while [both] trying to reason with Captain Universe and desperately trying to ring in help from the Avengers, the Fantastic Four, and anyone else he can think to call," - Roger Stern

And now, for my favorite part. I know that we're not doing preview on this site anymore, but here is some good preview art for the issue. 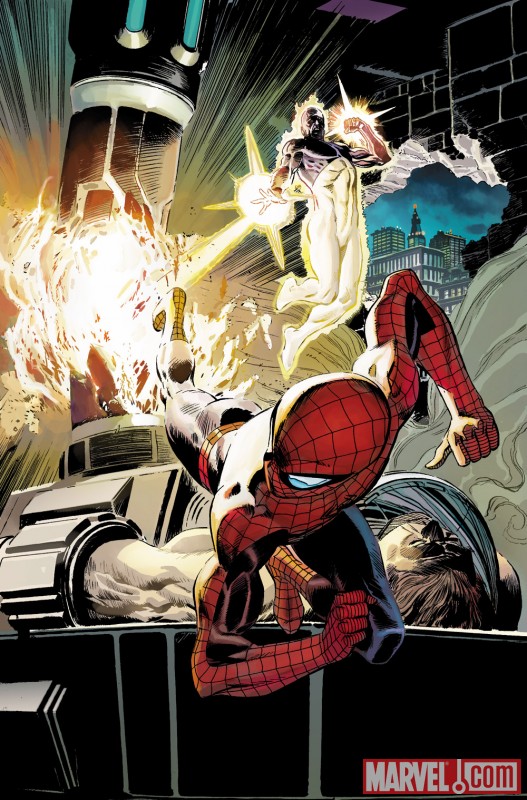 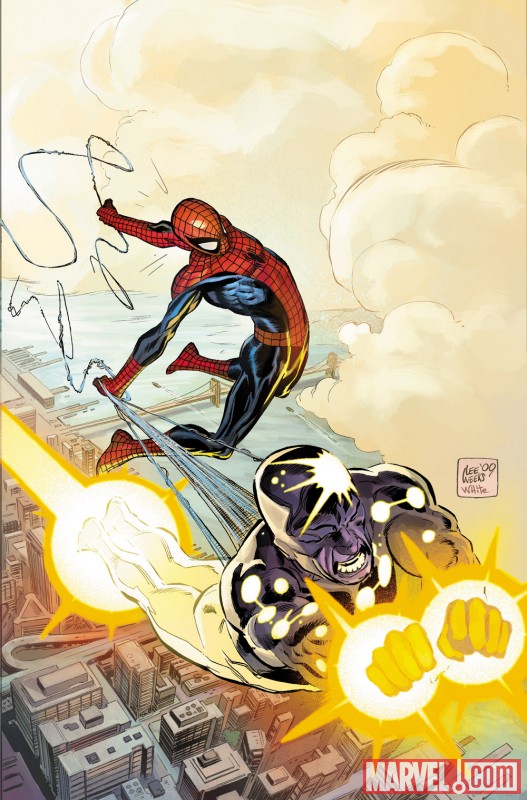 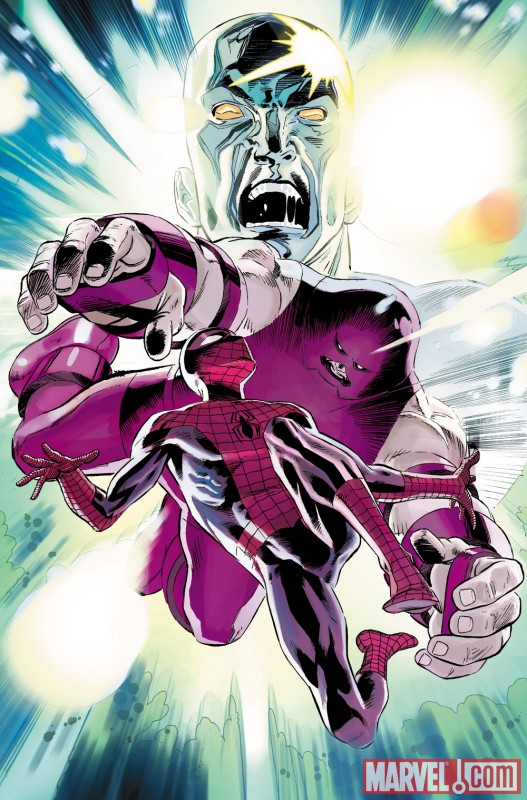 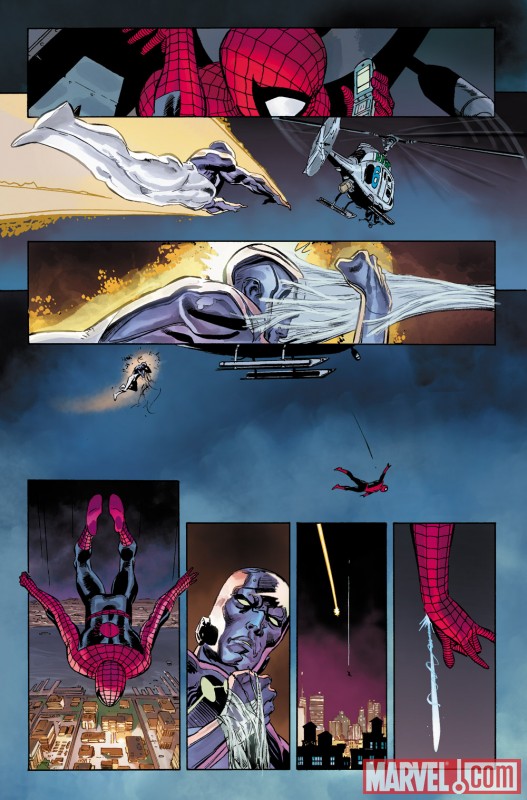 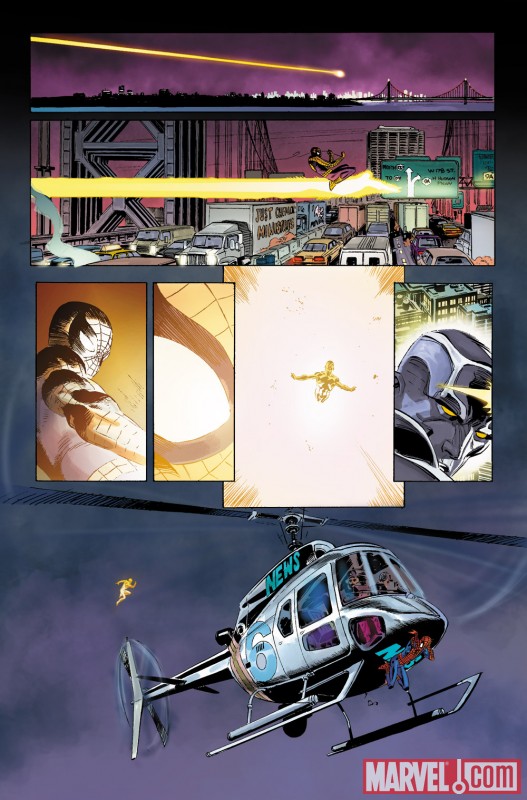 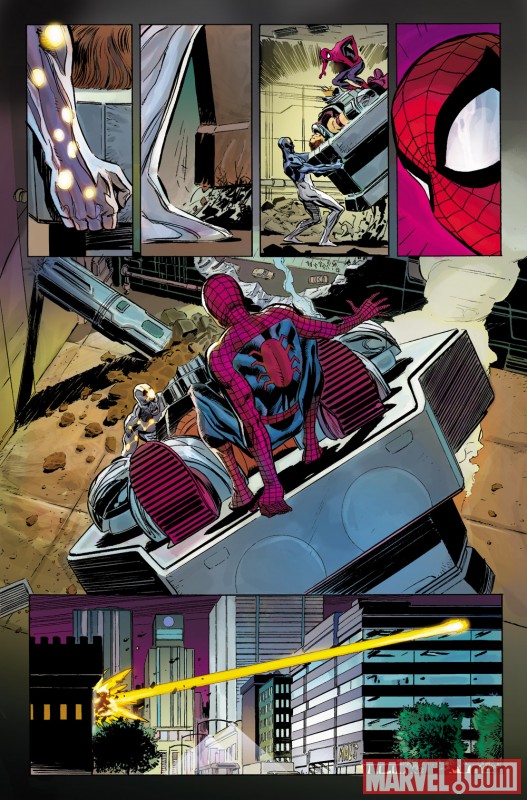 For those who didn't already know Spider-Man was once Captain Universe as well! See Amazing Spider-Man 327-329. Any of our guys wanna try adding this to our Spidey classics? PM me.

In honor of Spider-Man Fever, I have decided to revisit one of the webhead's earliest adventures with Doctor Strange in a story titled "The Wondrous World of Doctor Strange!" brought to you by the masters Stan Lee and Steve Ditko! 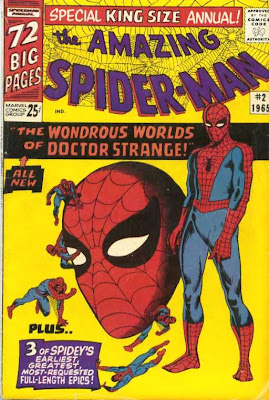 The story begins with Spidey lamenting about how boring his night has been...

In another part of town a man named Xandu walks in on a bar fight; two heavily muscled but unintelligent men have just finished beating on everyone else in the bar. Sensing that these two men are perfect for his scheme, Xandu hypnotizes them. Under Xandu's spell the two men feel no pain and have fists of steel.

Back at his hideout we learn that Xandu possesses one half of a powerful artifact known as the wand of watoomb. The other half of the wand is in the possession of Strange. Xandu dispatches the two men to the sanctum sanctorum to retrieve it.

The men waste no time arriving at the sanctum. Strange's spells prove useless against the two hypnotized men who knock out Strange and steal the other half of the wand. Luckily for Strange, Spider-Man spots the two thieves escaping out the skylight. Spidey does not fare much better, as the two thugs cannot feel Spider-Man's punches. They manage to beat Spidey into submission and escape but not before Spidey hits one of them with his spider-tracer.

Back at Xandu's hideout, the two men give him the other half of the wand granting him considerable power. He is about to use his power to destroy Strange (still lying unconscious back at his sanctum) when Spider-Man arrives. A brief fight ensues during which Spidey manages to web Xandu's face causing him to drop the wand. Xandu conjures up a spell that sends Spidey into another dimension. Thinking quickly, Spidey grabs the wand before he fades away. Xandu sends the two men into the other dimension to get the wand back.

Back at the sanctum, Strange finally regains consciousness. He uses his amulet to guide him to the wand.

Strange confronts Xandu at his hideout and easily defeats him. Just as Xandu is about to surrender, Spidey and the two men return to our dimension, allowing Xandu to once again take the wand.

Realizing he cannot beat Xandu alone, Strange retreats and enters his eptoplasmic spirit form. While in this form he helps Spidey defeat the two men by drawing his attention to two conveniently placed electrical wires. Spidey uses the wires to deliver a shock to the two men, snapping them out of Xandu's trance. Strange then re enters his body and with the help of Spider-Man defeats Xandu by disrupting his ability to concentrate. Strange then drains all the power from the wand and gives Xandu a morally debatable mindwipe. After thanking Spider-Man for his help, Strange departs.

Ditko's Doctor Strange was famous for the wildly imaginative worlds that the artist was able to create. While we only catch a glimpse of them in this annual, it's still pretty cool that Ditko was able to include Spider-Man into one of these far out adventures. A panel involving Spider-Man looking at a world beyond his understanding is one of my favorite pieces of Spider-Man artwork. 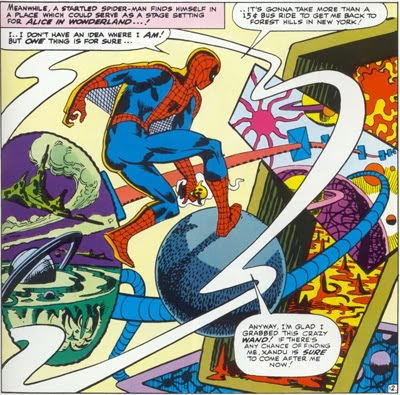 Along with Ditko's brilliant artwork is Lee's goofy but incredibly fun dialogue. Another aspect I liked was how Spidey used his brains to escape from the other dimension. Like all the other issues of the Lee/Ditko run, fans do themselves a great disservice by not reading it.

New Avengers 63, like New Avengers 62 ties in with Marvel's biggest event at the moment - Siege, which will be reviewed in time by Matthewaos. Thanks man.


Anyhow, we last saw the avengers in New Avengers 62. At the end of the issue we saw the Avengers, together with the resurrected Captain America and Nick Fury, preparing a full scale attack on Norman.

The Story
The opening scene of the issue already shows the Avengers taking on Norman's Dark Avengers.The fight focuses on Luke Cage, who while fighting suddenly has a flash back of this conversation with his wife, Jessica Jones, the day before.

In the flashback, the two discuss their future. Jessica does not want Luke to fight against Osborn, fearing that if they loose, he will go to jail, and will not be able to father their new born child. The scene ends with Luke and Jessica kissing. In the immediate next scene we see Luke grabbing on to Venom's long twisted tongue and throwing him against a building with it. Some contrast..


As the fight continues, the focus turn to Mocking Bird, as she too has a flashback of what happened the night before. By now, we can see where the story is going with this. The night before, Bobbi ( Mockingbird ) wakes up covered in sweat. Her husband, Ronin, asks what is wrong, but does not get a response.

Bobbi walks out the room. In the next scene the two are suited up, and Ronin is chasing after his wife. As, Bobbi tries to explain that she needs some time two things happen.

1) Spider-Man randomly pops into the scene, and is quickly asked to leave *random*
2) Mocking Bird spots a Lady Dr Octopus of some sort to release her stress on

Once the Lady Octopus is out of the picture, the couple consider restarting their lives once this war is all over. Returning to the fight scene a number of things too long to explain happen. Essentially, Sentry appears and makes a big mess. Bobbi is last scene with her lifeless hand sticking out of some rubble.


Clearly, this issue, and most likely the next as well, will be focusing on each individual character in the war, or maybe not. Regardless, I cant wait to see what Spider-Man was thinking the night before the war. What was he doing? Was he with Felicia, or Carlie? Or just by himself.
Read More

From the mind of Brendan McCarthy comes Spider-Man Fever! A tale that attempts to capture the look and spirit of Steve Ditko's classic run on Doctor Strange. How does he do? Let's take a look... 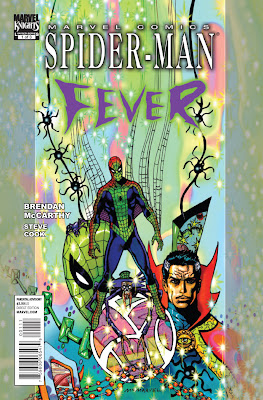 The Story
In another dimension, Doctor Strange is trying to solve the mystery of Driddil's doorway when his doorbell rings. 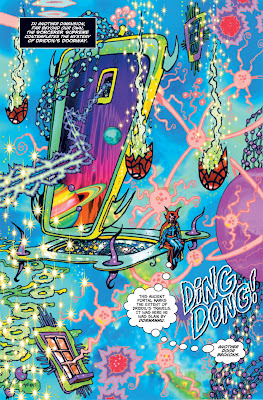 Meanwhile in New York City, Spider-Man is attacked by the Vulture. During their fight the two of them crash into an apartment building.

Strange receives a delivery in his sanctum sanctorum; the lost journal of Albion Crawley. Unfortunately, the book was booby trapped and upon opening it Strange accidentally unleashes a webwaze energy stream that makes its way through New York City's pipelines.

Back in the apartment Spidey finishes webbing the Vulture up against a sink. A spider-demon (travelling on the webwaze) comes out the sink and temporarily mind controls the Vulture. The mind controlled Vulture frees one of his arms and sprays Spider-Man with a can of bug spray he grabbed off a shelf. This has a very negative effect on Spidey, who loses his balance and falls out the window. Disoriented, Spidey unknowingly enters the sanctum sanctorum through a window and collapses in Strange's bathtub.

Reading Crawley's journal, Strange manages to find out who he was. Crawley and his student Victor went on an expedition to another dimension in search of infinite mindpower. They were captured by spider-demons called the Arachnix. Crawley managed to escape and return home, his quest a failure. Victor was turned into a giant fly and never heard from again.

Spider-Man begins hallucinating in the bathtub until a spider-demon arrives and steals his soul. Hearing what was going on, Strange rushes in to try and save Spider-Man but is too late.

Well that was different... but in a good way. It took me a while to warm up to McCarthy's work but after a couple of read throughs I began to appreciate what he was doing. His artwork is clearly influenced by Ditko both in the bizarre worlds he illustrates and how he draws Spider-Man and Strange. It's also so detailed that when you read it again you are bound to find something you did not notice the first time. Add to that the interesting color palette and Spider-Man Fever is certainly a fun book to look at.

Luckily it's also a fun book to read. This is a comic that does not take itself seriously. Whether it's crazy Daily Bugle headlines "Feral Cats Eat Church Lady who Fed Them!" or spider-demons who refer to their prey as "soul sushi" there's a lot of humor to be found here amidst the weirdness and horror. The plot itself is fairly simple but the way it is presented certainly is not.

There are some eye rolling moments; Spidey getting defeated by bug spray and talking dogs from another dimension are some of the lamer elements found in the story. Hopefully Spidey will not spend the rest of the series waiting for Doctor Strange to save him.

Spider-Man Fever is certainly not for everyone. Open minded Spidey fans will find a fun, bizarre and beautifully drawn story to take in. It may take a while to warm up to, but if you give Spider-Man Fever a chance and embrace its weirdness you will find an entertaining, offbeat Spider-Man story.
Read More
Newer Posts Older Posts Home