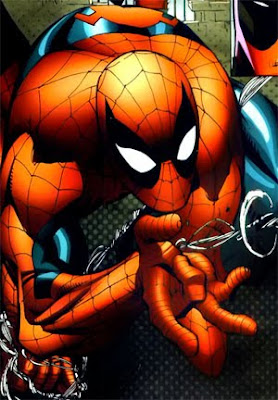 Here it is. The third and final part of 'Whatever A Spider Can', the latest Spidey / Deadpool team-up review!

In the opening scene, Spidey apologizes to Reed Richards for bringing Deadpool to the FF headquarters. Apparently Spidey had no where else to go to help the bullet-laden Deadpool. Richards and the rest just want this guy out of the Baxter Building, however, and as Mr. Fantastic explains this curtly to Spidey, Deadpool shoots himself in the foot... with his other foot. (Well, I guess if Hit-Monkey can wield a gun this way then Deadpool is going to give it a try too.) Spidey embarrassingly escorts the limping Deadpool away from the FF as Susan Richards asks rhetorically how Deadpool managed to get a gun through their security system.

Next scene, Spidey rents a room at a hotel to change his clothes. He wanted a place to change into fresh Spidey duds without giving away his identity and yet keep an eye on Deady. After asking Spidey if he did a number two in the bathroom, Deadpool gives him the slip by pretending to use the bathroom only to sneak out the window with Spidey's spare costume!

The following day, plastered over every newspaper in NYC, are reports of Spider-Man's death in Bellevue hospital from a mysterious gunshot wound. Peter Parker is aghast, and quickly calls other heroes like Reed Richards that know Spidey's secret identity to tell they that he is not dead, and that he's getting to the bottom of this soon. So of course Peter decides to go to Spidey's public funeral where Hit-Monkey arrives sorrowful and, I imagine, guilty since Hit-Monkey believes the bullet that killed Spidey was fired by him. But (as you the reader, have undoubtedly put together on your own) this is all a ruse to lure Hit-Monkey out by Deadpool! And it worked.

Parker screams out; "GUN!", as Deadpool pops out from nowhere with his machine gun poised against the unharmed Hit-Monkey. Then Deadpool asks the police officiers to arrest this monkey. Hit-Monkey whups the polices' behinds, grabs their guns, and guess what? Attempts to fire at Deadpool, but Deadpool is behind Hit-Monkey already. Deadpool, however, is interrupted by our non-murdering webslinger who bends Deadpool's gun shafts upwards rendering his guns useless. Hit-Monkey sprays them with bullets and after Spidey reprimands Deadpool about deceiving everyone into believing Spidey was dead, they split up to take on the Hit-Monkey. Deadpool is to distract and Spidey is to capture, and since this is a Spidey site here's how it goes...

Deadpool trys to reach out to Hit-Monkey afterward, but only to receive a big bite on his face! Both Hit-Monkey and Deadpool whip out the damaged guns at each other, fire, and consequently the guns explode. Hit-Monkey gets away, and Deadpool goes to prison. Spidey breaks Deadpool out of jail, and tells Deadpool to stay away forever, quit feeling sorry for himself, and reprimands Deadpool for trying to be a good guy only so that people will like him.

Overall this issue was good, but not as strong as the last two. The art seemed unpolished and the inks less pronounced. The dialogue was still amusing and the delivery of the panels fun, but I could sense this story getting tired as if it could of been wrapped up in two issues instead of three. Plus, the logic of this story breaks down when you realize that J. Jonah Jameson, Spidey's public arch-nemesis, is the mayor of New York. I'm sure the city of New York had to foot the funeral bill and Jonah's Anti-Spider Squad funding would of taken precedence over this.

Not only that, renting a room to change out of the old Spidey suit didn't fit either since they were just in the Baxter Building with the Fantastic Four; and furthermore, Spidey not only uncharacteristically breaks Deadpool out of jail, he destroys public property doing it, explaining to Deadpool that everyone will blame him, not Spidey.

Oh well, this comic was more about the humor and less about attention to detail, I suppose. And it was funny. The Spidey / Deady dynamic is a winning formula, for sure, because although I've stated that Deadpool is Marvel's evil Bugs Bunny, I'm realizing that he's even more than this, he's actually Marvel's very own demented Spider-Man.

Well worth the money spent. So if you missed the singles, definitely get the trade!