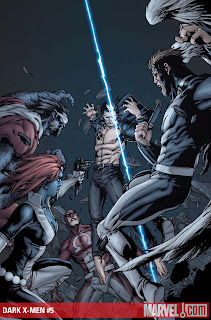 For those not familiar with the concept, Osborn has created his tem of X-Men, spinning out of the Dark Avengers/Uncanny X-Men crossover "Utopia". The team consists of Mystique, Dark Beast, Omega and Mimic. It's an even more dysfunctional group than Dark Avengers, and in this mini they hunt down Nate Grey, X-Man. If you are wondering why this book is reviewed here (aside from the fact that Norman Osborn also stars), well read more!

A quick sum up: The team tried to capture Nate Grey, though he managed to enter Osborn’s mind and take over. The two started fighting, inside Norman’s head, while Mystique understood what happened. The team managed to “enter” Norman’s mind, due to the help of some psychics, and they found an adversary there: The Green Goblin!

The Story:
While the Dark X-Men tried to enter Norman’s mind so to find him, they found the Green Goblin, who attacks them. Dark Best is showing him the “exit”, that will presumably allow him to take over Osborn’s mind, so he escapes them, while Mystique shouts them to go after him.
Elsewhere, Osborn and Nate Grey are fighting, with none of them winning. The Dark X-Men are still hunting the Goblin down, when he enters a room full of screens, named by Dark Beast “Osborn Central”. Now, this is why this review is put in this site. We can see images of Spider-Man, Gwen dying in Spider-Man’s web, the Dark Avengers, Osborn cheered by everyone, several fights with Spider-Man, and the cover of Amazing Spider-Man #39. Peter’s face is not shown though. 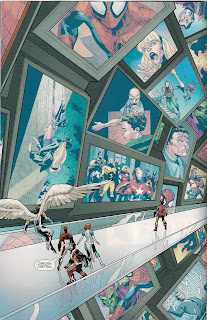 So the Goblin explains Osborn’s psychosis, while managing to injure Mystique. The others try to remind her that this is not real, so she is not really injured. Osborn manages to hit Nate Grey. The Goblin makes Mimic, mimic Omegas power and he enters the fight. The two can’t help not to absorb the power of Nate Grey so he is powerless and Osborn beats him.
Nate Grey is finally captured. He tells them that they have chosen wrong in fighting him, and that he could have helped them. Osborn orders his men to take him away and everyone (maybe except Dark Beast) and especially Mystique seems disappointed, by their success.

Thoughts:
I got this mini mostly of Nate Grey, but to be honest I enjoyed it very much. Dark Best and Mystique are portrayed perfectly here, and overall the creative team of Paul Cornell and Leonard Kirk, the team behind Captain Britain and the MI: 13 is doing overall a fantastic job.
Now, about that page… So I guess Osborn remembers that he most probably knew Spider-Man’s identity, but not who he is. This reminds me a little of those Lee/Romita days where Osborn wasn’t remembering that he was the Goblin, and at times he had a breakdown. Such a shame that this hasn’t played in Amazing Spider-Man. Though what I fear is that when they will want to resolve the Peter/Norman relation, this will most probably ignored. But it was a very nice touch.
Read More
Newer Posts Older Posts Home