"The Gauntlet" and Consequences 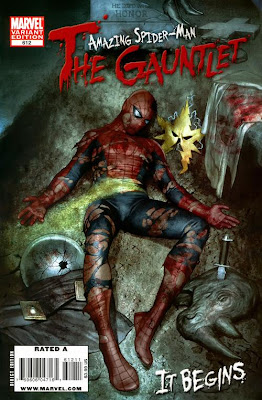 Here there be spoilers for recent issues of Amazing Spider-Man.

"The Gauntlet" was essentially advertised as a mega-arc in which Spider-Man would be pushed to the brink by successive battles against his greatest enemies. I'm enjoying the stories but I don't think it's better than average for Post-Brand New Day Amazing Spider-Man (with the caveat that an average issue of ASM in the current period is still pretty damn good.) One problem is that there isn't the sense that things are getting progressively worse for Peter Parker, because the events just don't seem that immediately consequential. Yet.

Negative Aunt May hasn't factored in for four issues, even though that could be a bigger deal. Peter's heartbreak over what happened to the Rhino in Amazing Spider-Man #625 could have affected him, but that wasn't the case in the next issue. Peter's employment status is barely relevant in the latest issue, as he had financial problems before he lost his job. As a result, there isn't really the sense that Peter's being pushed to his limits by the succession of battles.

Hell, what he's going through isn't that bad compared to what's been happening in other books. The kid in Kick-Ass was run over by a car, underwent months of surgery and physucal rehabilitation after a fight went badly and got electrodes attached to his testicles. And that was just in the first two issues. The Punisher's going to be bruised in the aftermath of his fight with the Mennonite, when he heads to a battle with Bullseye in the Jason Aaron/ Steve Dillon run. Lest you think I'm cheating by only mentioning "Mature Readers" titles, Daredevil would probably tell Peter to be a man if he went to complain about his problems.

Granted, there's still seven more issues until "Grim Hunt" and I'm sure Peter Parker will be in worse shape when that story begins. But, I'd have liked to see more signs that Spider-Man's being worn down. Hell, that could have been used effectively in earlier chapters of "The Gauntlet" as well. For example, his poor professional judgment in the Vulture story would have been more explainable if he had been sleep-deprived in the aftermath of events earlier in the earlier storylines (destruction of the Daily Bugle, the cruelty of Negative Aunt May, watching a little girl go into an uncaring foster system, the realization he's been unfair to Carlie, the physical abuse he's taken recently, the psychological aftermath of a draining fight with Mysterio, watching an ally forced to kill the woman he loves.)

I really like Zeb Wells's announcement that the Kraven women will use Madame Web's abilities to make otherwise standard stories worse for the wall-crawler. It's one of many reasons I'm looking forward to "Shed" (I'm also a huge Lizard fan.) Playing Monday Morning Quarterback, this approach seems like something that would have given the entire "Gauntlet" mega-arc a greater sense of unity. And made life tougher for Spider-Man.