Your eyes do not deceive folks, Ultimate Comics Spider-Man has arrived at Spider-Man Reviews! 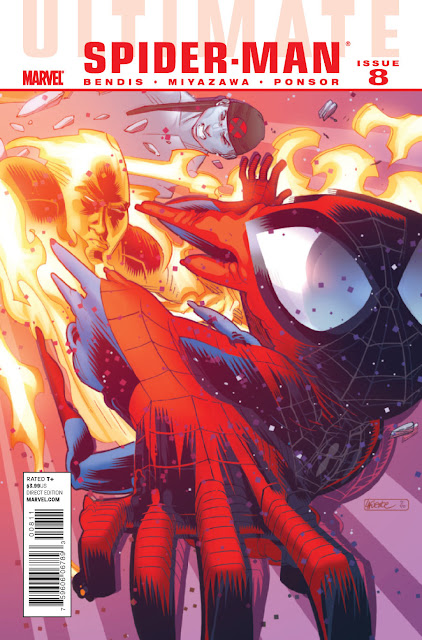 Now I realize that part two of a two part story might not be the best place to start, so bringing you up to speed is an order. But writing recaps make me tired, so I have decided to just let you read the recap page found in the issue. Click to enlarge!

Up to speed? Fantastic.

We start with Spider-Man and his amazing friends (ie. Iceman and the Human Torch) speaking with Rick Jones about his newly acquired superpowers. The Torch explains to Jones that the Watcher chose and gave him superpowers to be the savior of the world. All this is a bit much for Jones who wants to see the Watcher again. When the Torch informs him that the Watcher has disappeared, Rick teleports to the place where it was last seen; Project Pegasus, a military base in Wyoming. The three heroes decide to go a long for the ride.

When they reach the base they find it seemingly empty. While searching the base they come across a group of lizard women who call themselves the Serpent Squad. They are stealing what they believe to be their "serpent crown" from the base. A fight breaks out between the two groups. The heroes prevail, and Rick Jones even helped out. It turns out fighting a bunch of crazy serpent ladies was just what the doctor ordered, and Jones is now enthusiastic about his new role as a hero. At this point Vaughn, the man in charge of Project Pegasus, arrives with his security team. After explaining the situation the heroes teleport back home.

Back home Jones decides that he has to go find himself and bids farewell to his mother. Before he leaves he comes up with his superhero name: Nova! When Iceman asks Spidey if they will see Rick again, Spidey replies that Nova will show up at the least convenient moment for him.

So here we have the introduction of Ultimate Nova and I find myself not caring too much. The best part of Ultimate Spider-Man has always been Peter's personal life which was largely absent from this issue. The plot felt like it belonged in an issue of Fantastic Four. As a done in one issue this story would have made a decent diversion, but by this issue I was already getting bored.
Read More
Newer Posts Older Posts Home