Whether you are a regular reader of this blog or this is your first visit I feel compelled to inform you that today is your lucky day. For unlike previous Web of Spider-Man reviews, I, in my infinite generosity, am going to review all three stories that are found in this tome of Spidey goodness. There is no need thank me, but if you are really feeling grateful you can message bulletproofsponge and demand that he start paying me. 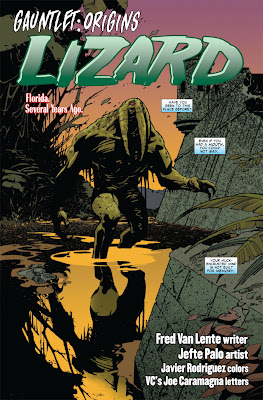 The story starts "several years ago" in the Florida Everglades with Man-Thing looking around the stone fortress where Spider-Man first fought the Lizard waaaaay back in Amazing Spider-Man #6. Man-Thing is able to sense the emotions and passions that were felt during that fight and thus able to get a sense of whom the combatants were.

Flashback to Baghdad, where during an intense battle medic Curt Connors risks his life to save one of his fellow soldiers, unaware that the soldier has been booby trapped. Curt is too late to discover the bomb which explodes in his face.

Connors wakes up in the infirmary, overhearing a man named Ted Sallis talking about cell regeneration. Sallis explains that he has been commissioned to create the next Captain America who will have the ability to regenerate cells. It is at this point that Connors discovers that he 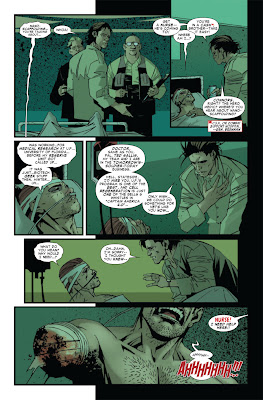 lost his arm in the explosion.

In the present Man-Thing is suddenly attacked by the Lizard and his minions. Man-Thing makes short work of the Lizard's subjects but has trouble taking down the Lizard himself.

Back in the past Connors phones Sallis asking for some advice on limb regeneration, to which Sallis suggests that he use lizard cells. Sallis, believing that Connors might be on to something, takes his girlfriend Ellen and moves his project to the Everglades. Once Sallis is in Florida, Ellen betrays him, revealing that she has been working for A.I.M. Sallis grabs a prototype of his super soldier serum and jumps in his car. He injects himself with the serum in order to keep A.I.M. from getting it. Unfortunately giving yourself an injection while driving is a lot like texting, and Sallis pays the price, driving his car off a cliff and into a swamp. This swamp is filled with chemicals that the Lizard had previously dumped there and that combined with his super soldier serum turns Sallis into the Man-Thing!

Back in the swamp Man-Thing and the Lizard continue their fight. The Lizard recognizes that Man-Thing is actually Sallis, distracting him long enough for Man-Thing to use his special touch, putting Lizzy down for the count. Man-Thing is left to wonder whether he has visited this place before.

Second story - A Matter of Trust!

We join May "Mayday" Parker from where we left her last month with a gun pointed right at her head by police Captain Ruiz. Spider-Girl manages to talk Ruiz down and proposes that the two of them join forces to end the gang war between the Black Tarantula and Silvermane which Ruiz accepts.

And with good reason; as soon as May gets the Tarantula's confirmation at school the next day she informs Ruiz. May is conflicted about betraying the Tarantula but has no time to beat herself up as she spots April setting up a date with her ex boyfriend Gene Thompson. Desperate to have her call it off, May invites April to help her at her meeting with the Black Tarantula, which April accepts. Before she can leave school May is stopped by Wes who apparently has something important to tell her. May, needing to get to her meeting, blows him off. 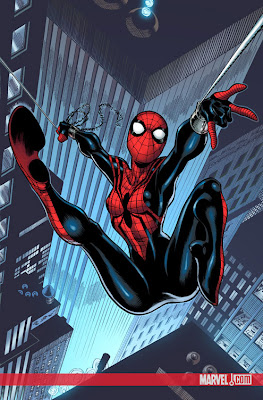 Silvermane is informed by his contact in the police department of Spider-Girl's meeting with the Black Tarantula. He dispatches his assassins to crash the meeting.

Unfortunately April is preoccupied talking to Gene on her cellphone (this is why cellphones are evil) and misses May's signal.

Back in the warehouse the Black Tarantula and Spider-Girl are making easy work of the assassins. Feeling betrayed, the Tarantula informs May that their friendly relationship is over and escapes, covering his tracks with an explosion. The explosion gets the attention of April who finally activates the signal device. The police arrive but are too late. As Spider-Girl and April flee the scene she wonders who informed Silvermane of her meeting with the Black Tarantula. She only has one suspect... April!

The prelude begins with a look at the place of reptiles on the planet Earth since the dawn of time. Reptiles have always given in to their animal instincts while mankind has questioned them. Doctor Connors used science to awaken the animal instincts within himself but with the help of Spider-Man managed to suppress them.

In the present, Connors' animal instincts are bubbling up to the service again, and he finds he can no longer ignore them. He begins looking for a way to bring the Lizard back...

Fred Van Lente's Gauntlet Origins story was disappointing. It did not shed any new light on the character of Doctor Connors or his reptilian alter ego, though we do learn a lot about Man-Thing. The most baffling thing about the story was that it was more about Man-Thing then it was about the Lizard. That Man-Thing's origin is tied to the Lizard's does not make either character's story more compelling.

Not to say the story was all bad. The little bits we do get of Connors are pretty cool, specifically when we see him as a soldier in Baghdad. That he lost his arm trying to save another man's life shows us what kind of man Connors was before the accident and amplifies the tragedy of the character. And as much as I complain about Man-Thing's inclusion in the story, seeing the events unfold from the creature's point-of-view was interesting.

Spider-Girl took an interesting turn this month. Her relationship with the Black Tarantula has taken a dive and with it any hope of ending the gang war peacefully. As has been the case with Spider-Girl for the past few months April continues to be the most entertaining character of the series.

The last story by Zeb Wells was by far the strongest. Featuring some great writing and equally strong artwork by Xurxo Penalta this was the glimpse into the mind of Doctor Connors that I was expecting from the first story. "Shed" is shaping up to be the best of the Gauntlet stories yet.

Web of Spider-Man #6 is something I can only recommend to those of you who are following Spider-Girl. The best story of the issue is simply a prelude to a story you will be getting in Amazing soon enough. This story is also short enough that you can finish it inside the comic store before the overweight guy behind the counter notices and starts chasing you with his plastic Thor hammer. 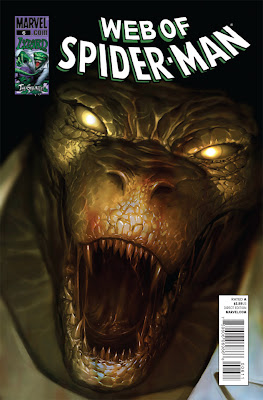