Alright folks,
Sorry this place has not been updated in the last couple of days. Anyways, here is the review for the issue in which our dear Peter Parker gets fired, most likely never to have a photography job again. 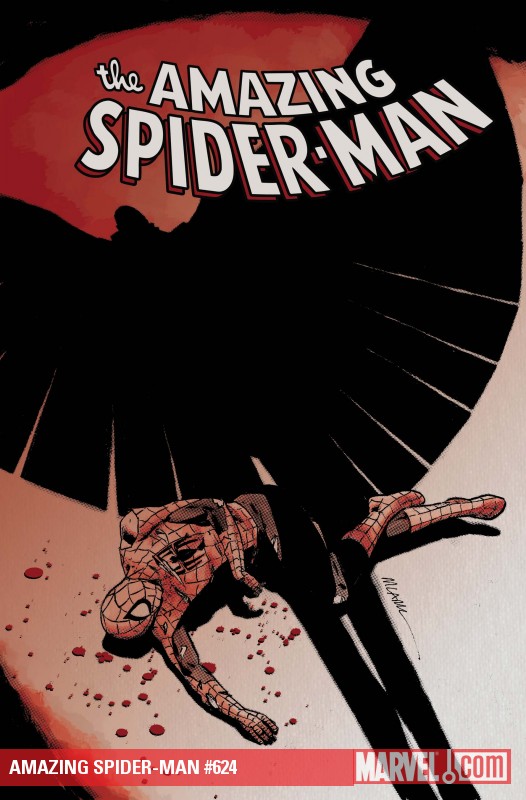 The Story
So, in the preview, we see Spider-Man has changed tactics and decides to spray Vulture with webbing. His plan works out absolutely fine for him until he runs out of web fluids. In the midst of it all, Spider-Man blurts out that the old vulture, Adrian Toomes, said it was the mobsters who made him.

The red vulture then takes off, obviously to return to the mobsters. Fortunately, Spidey throws a Spidey tracer on the vulture.

Elsewhere, Jameson is in turmoil, knowing that his security guard gave his life for his employer. In case you did not know, this is the same security guard who Spidey thought was Jameson at the end of Amazing Spider-Man 623.

The slight problem arises as Jameson is now even more connected to the creation of the Vulture since the Vulture actually came to hunt him. There is also no evidence that Jameson actually fought the Vulture, thus resulting in a possibility of Jameson being charged for the death of the security guard... I think.  Unfortunately, I;m not entirely sure what the deal was, but at the end of the day, proof was needed that Jameson was fighting the Vulture.

Peter then "photoshops" an image of Jameson fighting the Vulture, and releases it to the press. Jameson however, knows that the image is a fake. He thus publicly announces what Peter has done, and warns other organizations to stay away from him.

Anyway, in a scene before Peter get publicly humiliated, the Vulture learns that he was indeed created by the same machine used to create scorpion. It was his own idea to create a Vulture... just with another man. The mobsters shot Jimmy in the leg and used him to become their Vulture.

This is really a sad issue that ends with Peter, in his Spidey costume sitting where the Daily Bugle used to be. As he sits there he wonders what his friends and family must be thinking of him.


With Aunt May still partially psycho due to her negative touch, Peter is probably gonna get a big mouthful from her. Probably the only person Peter can talk to would be Mary Jane, since she knows his identity, and could possibly understand his reason for doing what he did. Other than that, he could talk to all the other Avengers as well, not that they'd really care though.

I was also wondering, could it be possible that Jameson is not so innocent after all. Perhaps the security guard died in vain, or was manipulated into getting in the vultures way. There were no witnesses, and all of the sudden Jameson has become soft and honest.

Overall, this was an okay issue, with not so okay art. Look out for the next issue - Amazing Spider-Man 625, in which the Rhinos collide.
Read More
Newer Posts Older Posts Home