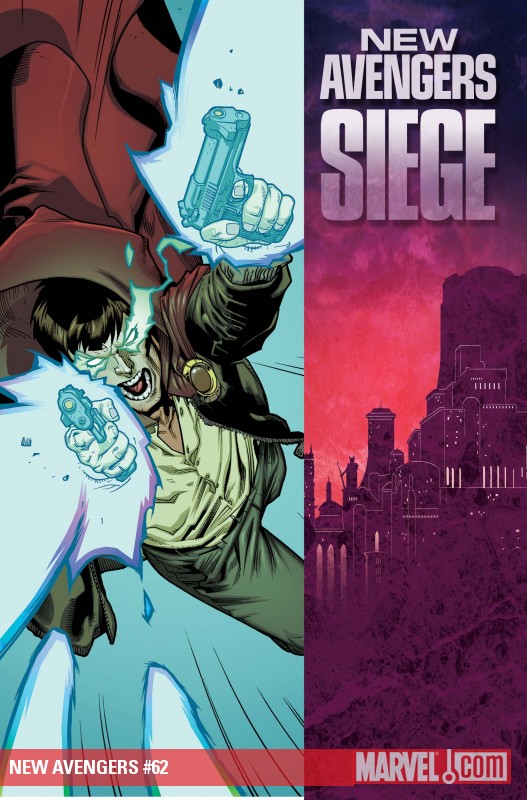 So, New Avengers issues do not come out all that often. That is probably why I keep forgetting about it. The only reason I actually remembered was the little article about Spider-Man: the New Avenger. Anyhow, here is the review for New Avengers 62. It is a direct spin-off from New Avengers 60-61.

The story starts with Spider-Man falling off the building he got pushed over by the Griffin in the previous issue. Spider-Man, as always is talking to himself, stating that it was beneath him to even be fighting the Griffin, much less be pushed over.

Just then, Spider-Woman, who is now mind controlled ( also in previous issue) comes after Spidey to kick his butt. In quite a cool fight scene, Spider-Man does get his butt kicked pretty bad. Obviously he is not really fighting back though.

Elsewhere, the two Captain Americas are still fighting Arthur Parks aka the Living Laser. Keep in mind that all these thugs are all the Hood's men. Anyhow, there is not much of a battle here as Luke Cage appears out of nowhere and beats the $#!+ out of the Living Laser. It does not take a genius to figure out how come the laser beams shot do not affect Luke Cage. The three are later met by Nick Fury and his gang of 'less famous' heroes.

Meanwhile, Spider-Man is still being beaten. Somewhere between the fight however Spider-Woman wakes up and is able to speak, but still cannot control her actions. From a distance, Spider-Woman is seen firing her beams at Spidey as he lies seemingly unconscious on the floor. As the two baddies come down to see, suddenly Spider-Woman is in control of herself and Spider-Man is up and able.

Regardless, the entire scene is really confusing to me. Together, the Spiders fight and web the bad guys up.

At the end of the issue, everyone meets back at base, including Nick Fury and gang. Obviously everyone is surprised to see Steve Rogers back from the dead. In the meeting hall, the television shows the Thor being taken down - in Siege # 1.

Just then Spider-Man comes in with the best scene in the comic. See below.

The final scene is similar to the scene in Siege #1, where Steve Rogers and the Avengers prepare a full on attack on Osborn.
Read More

I officially introduce to you Spider-Man: The New avenger. Thats right. As many have already expected, Spider-Man will be staying on the NA team after Siege is over. He is currently an avenger anyways, just that the Avengers team he is now on is not recognized by the government. Reason for that being is that Norman Osborn is leading the recognized team aka the Dark Avengers.