Never fear fellow bloggers! Your friend and mine, bulletproofsponge, will be back reviewing Amazing soon. Until then, I bring you my review of Amazing Spider-Man #622 featuring vampires and Greg Weisman! 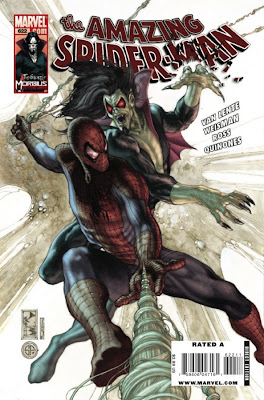 First story - It Is The Life

The story begins with Spider-Man and the Black Cat after a night of no strings attached love making. The Cat puts a damper on the mood when she tells Spidey that she sold his blood (retrieved last issue) to some wannabe "dracs."

Spidey, understandably disturbed by this, heads down to a "vampire" club as Peter to try and get it back. While there he meets a mysterious woman who seems to know who Peter is and what he is after. She hypnotizes him and tells him that Morbius has his blood and gives him his location. 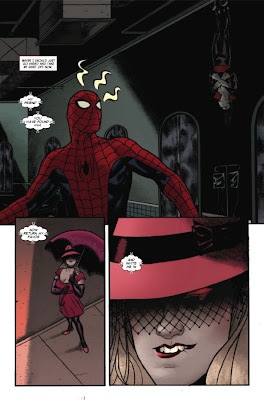 The next day Spidey invades Morbius' hideout and under the influence of the woman he met the night before, lets her in. It turns out this woman is Martine, Morbius' ex-fiance who is also a vampire. Martine is still carrying a torch and wants Morbius to join her as "true undead." A fight ensues and things go south when Martine takes Spider-Man hostage. To save his life Morbius agrees to comply with Martine who then throws Spider-Man into some wooden furniture. Spidey grabs a wooden stake from the shattered furniture but hesitates to use it. Luckily Morbius has no such moral qualms, and shoves Martine into the stake Spider-Man was holding.

Although Spidey is angry at first he understands when Morbius tells him it was the only way. Morbius then reveals that he had bought Spider-Man's blood off the dracs and was hoping to use it to help find a cure for Jack Russell also known as Were Wolf by Night. Morbius apologizes for taking the blood and destroys the vial. He feels responsible for Martine and Jack Russell becoming what they became. Understanding what he's going through, Spidey gives Morbius some more of his blood.

We start with Flash Thompson winning another marathon with Peter and Betty Brant cheering him on. Flash is euphoric.

Four weeks later Peter and Betty witness that Flash is not having the same amount of success learning how to walk with his prosthetic legs. After doing his best but falling, we see him sink into a depression.

Three weeks later Flash asks Peter to ask Spider-Man if there is anything the heroes could do that would help him grow back his legs or give him better ones. He figures that if they can do that for him he can return the favor and become a superhero. Peter later receives a phone call from Betty who has been told by Flash's doctor that he is going through the five stages of grief backwards. He started with acceptance, then depression and now he is bargaining.

For the next two weeks Spidey talks to everyone he can think of but comes up with nothing. When Spider-Man shows up to give Flash the bad news, Flash lashes out at him, entering the second stage; anger.

A week later Flash receives an email from a shady company called "Reabilify" that offer to give him indestructible cybernetic legs at no monetary cost. Instead he would be required to pay off the debt by entering into the company's service. Denying that these new legs may cost him something more valuable then his money Flash believes he has found what he was looking for. Before he can respond to the offer Betty arrives to bring him to his birthday party.

At his party Flash is surrounded by his family, friends and achievements. His father even shows up to tell his son that his actions inspired him to join AA. Harry and Peter also managed to track down Flash's old flame Sha Shan who will now be Flash's physical therapist.

Five weeks later, Flash deletes the latest email Reabilify sends him and heads to his therapy session. As he attempts to use his prosthetic legs he falls but this time starts laughing.

Given Fred Van Lente's previous work with Morbius it was only matter of time before Morby showed up in Amazing. I have never been a big Morbius fan but I really enjoyed his appearance here. Morbius is sympathetic and likable, which is not how I remember him from his old Amazing and Marvel Team Up appearances.

There were other nice touches throughout the story as well. I loved how Peter tried to blend in at the "drac" club completely oblivious to the Twilight craze. I also liked how he chose to invade Morbius' lair during the day on the basis of his knowledge of horror movies. The artwork by Joe Quinones was fun and suited the story well.

The second story penned by Greg Weisman, better known as one of the main writers/producers of the wonderful Spectacular Spider-Man cartoon, was an interesting look at the trials and tribulations of Flash Thompson. Weisman brilliantly frames the story around Flash going through the five stages of depression backwards. All of Flash's actions and emotions are understandable; I know if I lived in the Marvel Universe and had lost my legs I would probably be looking at cybernetics as well. Weisman's knowledge of continuity also shines through as he makes great use of figures from Flash's past including his father, Sha Shan and even a cameo by Tiny!

As expected, the artwork by Luke Ross looked fantastic. What was most impressive was how expressive all his characters were, especially Flash. He was the perfect choice for an emotional story like this.

Issue #622 offered up two great stories and a nice break from the main Gauntlet storyline. 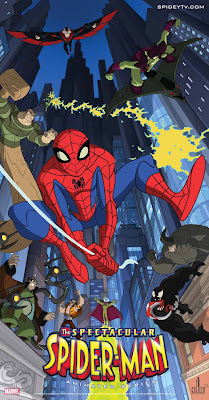 Do not forget to check out The Spectacular Spider-Man on Disney XD. If you do not get Disney XD, most of the episodes are available on DVD. Check it out, you will not regret it.