Peter Parker is asked to take a photo of some NYC tourists; enter Wade Wilson, who grabs the camera from Peter and takes the shot himself, leaving a parting quip for Skippy (Pete) to not quit his day job. Oh the irony!

Apparently Wade Wilson (a.k.a Deadpool) has arrived in NYC to find Spidey and learn some new pointers from the Web-Head in art of heroism. 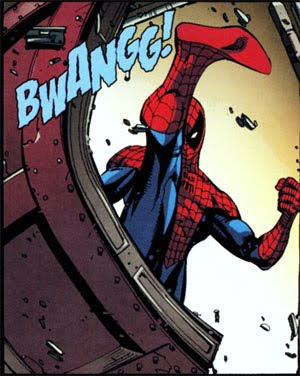 Next scene, we have Pete at his day job, the Frontline, peering through a window and spotting Wade below on the street. He asks Robbie if he has much to do implying that he wants to cut out. Robby does, so Pete gets to stew knowing he won't be able to prevent whatever trouble Deadpool will start.

Later on, Spidey swings into the Smile Deli for milk and a few bananas (that's right... in full costume! Spidey saved the owner, Mr. Cheng, from Screwball, so apparently he feels comfortable shopping there in his spandex!). And guess what? Spidey finds the corpses of the owner and the staff littering the back room, and who does he immediately blame without any proof whatsoever? Yep, you guessed it, Deadpool!!! (Well, actually Peter got the idea from a cop who claimed this was a professional hit, and does he know anyone who would be suspect? Peter grits his teeth and you know he's thinking of that one guy who could pull this off,

Spidey catches up to Deadpool and proceeds to give him the ultimate beating that only few like Deadpool can take. Lots of farty, toilet bowl humor ensues, just because it's really funny. Deadpool passes out, wakes up to find himself webbed up! Take a wild guess what happens next?!?! They talk! Spidey is curious why Deadpool took the smackdown without fighting back. Deadpool convinces Spidey that he didn't do it! Yeah! Deadpool had an alibi, he was at Frontline when it happened, asking Robbie to run a front page ad telling Spidey to meet up with him. Oooohh, the irony!

So now what do we get? The ultimate Deadpool team-up of the century, that's what, so long as Deadpool doesn't kill because Spidey doesn't like that. They arrive at the crime scene together where Deadpool points out the angles of the shots, the precision it would take to execute these murders points only to one being, and one being only... Hit Monkey!!! Enter Hit Monkey clubbin' around with like six sexy (human) babes, yeah baby, because that's funny.

As Deadpool predicted, Spidey doesn't believe his story about Hit Monkey, because Spidey isn't crazy like him (although I'm sure Spidey has spoken to animals who talk before. I don't know, nothing comes to mind, but I'm sure he has. But anywho...) Spidey does come around to ask how they could catch him which the answer is, they can't. The best they could do is find out who Hit Monkey will hit next which are basically other hit men. And the only hit man Spidey could think of in NYC is.... (drum-roll and some dun-dun-daaaas please)... Deadpool!!! That's right, folks! Deadpool.

So is this comic worth the price of admission? Yes, absolutely! If you're in that zany-evil-Bugs-Bunny sorta mood which can only be sated by Marvel's zany-evil-Bugs-Bunny character, Deadpool. The art is descent too if you like when the white eye lens of Spidey's mask squints to form that I-don't-trust-you, or believe-you fun look. And we all know why Spidey instinctively dislikes Deady. Deady's in cahoots with Mesphito in ruining Spidey's marriage! I've got proof too... see?

Plus Spidey kicks ass in this comic. And I like Spidey better then Deadpool, thus the action panels made me happy.

But to be fair, I've only read two Deadpool comics so far: this one and Amazing Spider-Man 611 and I'd have to say I enjoyed this ish a little more. Simply put, there wasn't so much work in subsuming this comic book's art whereas ASM 611 was all over the place.

And we all know this is just promo material for Hit Monkey #1 which I'll probably flip thru at my LCS next week. No harm done there.