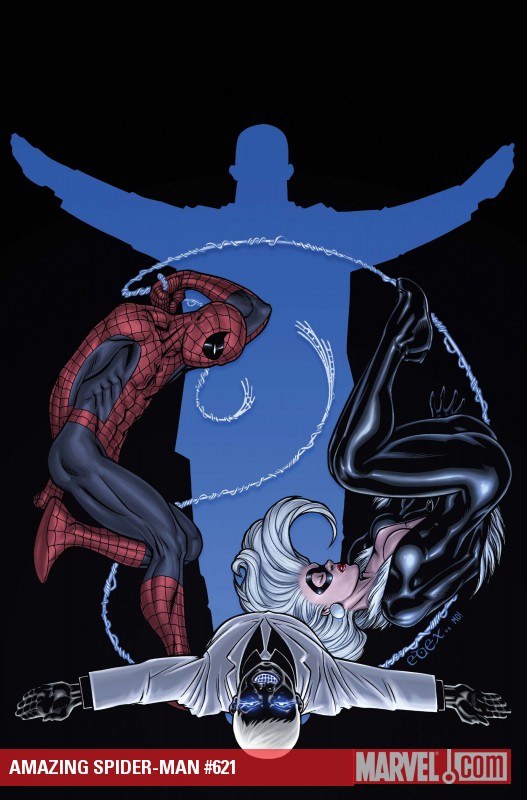 This issue surprisingly did not have too much of a conclusion. At the same time it leaves the reader hanging, under the impression that the story will not continue for a long time more.

There are several ways this comic could branch off.


One thing we know for sure is that all these issues will be touched on eventually. It is just a matter of when. Then again we cold roughly tell by looking at the covers for issues to come.


I will do this review slightly different and finish each sub-story at once instead of skipping from scene to scene. In the Amazing Spider-Man 621 preview, we see that the Black Cat is helping Spider-Man sneak into Mr Negative's house. We also see that Aunt May is still 'evil' and has kicked her nieces and Harry out of the house.

The next scene shows Carlie, taking a sample of the Red Gas/ Devil's Breath which is designed to kill a those with a certain blood type. Carlie states she has a sample of the gas and will try to break it down. At that moment she receives a phone call from her father. Somewhere later in the issue, we see Carlie meeting with her father. Mr Cooper has received his share of the loot from Mysterio. He now wants to escape the country wit his daughter.

Carlie however has different plans. Having broken down the 'Devil's Breath,' she tells her father that she has tampered with the gas so that it only affects her own blood type. Wearing a gas mask, she breaks the bottle leaving her father to inhale the gas.

Sounds cruel? Well, just before her father passes out she reveals that it is actually knock out gas, and that she was going to turn him in.

Simultaneously, Spider-Man and the Black Cat are busy trying to sneak into Negative's lair. Spider-Man acts as a diversion here and is left to fight Mr Negative's undead thugs, and ultimately Mr Negative himself. While Spider-Man does not have much luck here, Felicia is able to switch Mr Negative's sample of Spider-Man's blood with that of a butchered pig's.

Unlike in Amazing Spider-Man 607, where Spidey lets the Cat 'crawl' all over him, here he seems to be slightly distant and the two do not share a single kiss, despite Felicia's attempts to.

The next short story involves Aunt May. As in the preview, she chased everyone out of her home - including Harry. She is next seen returning to Jameson's home. Jameson Sr is seen on the phone, and has just received news from the Reilly's regarding Aunt May's recent actions. Obviously, JJ Sr, is not too happy that his wife has just thrown away her wedding gift.


The next, highly anticipated appearance is that of Mary Jane, in her apartment, still awake at the wee hours of the morning. She hears the doorbell and thinks to herself that it must be Peter needing some help. Instead, she is surprised, and not all excited, to see Harry Osborn, who was just kicked out of Aunt May's house. Harry ends up spending the night at her place - and thankfully nothing happens. The next morning, Harry is seen making breakfast for his host.

Returning to Carlie, she is last seen accompanying Peter, and helping him clean up his cuts and bruises, from his fight with Mr Negative. Obviously she has no clue how he got the injuries. The two end up sharing a moment or two with one another - as expected.

The comic ends with the short appearance of Dr Connor, agreeing to do his best to help a certain 'Mr King,' whose role in the story is yet unknown.


This issue tells a lot about the character of the characters in Amazing Spider-Man. To start, we can see that the attractive Black Cat, is still focused on only having fun. She appears to be care free and still has the hots for Spidey.

Peter Parker on the other hand seems to be backing away slightly from Felicia. It is quite possible that his actions may have something to do with his subtle feelings for Carlie.

Carlie too seems to be having something for Peter. Her character is shown in her ability to place her own father under arrest for being a 'dirty' cop.

Thanks to the evil touch of Mr Negative, we also get a glimpse of what goes through the back of Aunt May's mind. Her actions towards the other Reilly's Harry, would never be expected.

Harry, on the other hand, may, in time develop some feelings for Mary Jane, and vice versa. From the short panels with the two however, it is clearly evident that Mary Jane is not 100% over Peter.

Dr Connor on the other hand, is still missing his right hand. *Duh* Did I miss anything?