The highly anticipated comic was finally released yesterday. The last three issues of the Gauntlet have certainly not been disappointing. Amazing Spider-Man 617, 618, and now 619 have been the best stories since the return of Kaine in my opinion. 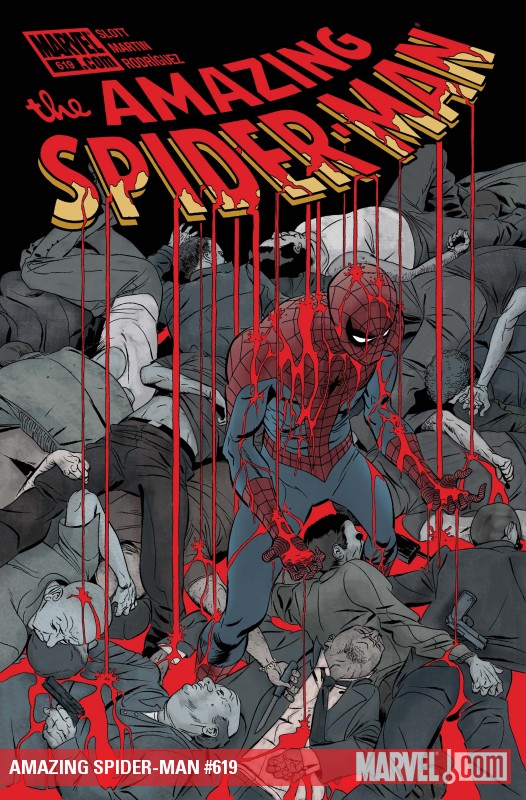 As mentioned in the interviews, another person has been resurrected from the dead. This story continues to intensify and is certainly worth your money.

In the preview, Spider-Man pops into the scene just as Hammerhead is dealing with his own personal mental fights. Spider-Man and the police join forces to stop the gang war.

The battle between the two gangs seem endless as Mr Negatives 'inner demons' ( thugs) are unable to die. For some unknown reason, they keep coming back alive. Another secret is revealed, unknown to the rest of the Maggia gang, as we find out that Silvermane is not really back from the dead. Instead he is actually a remote controlled robot, controlled by Mysterio.

Mysterio reveals he has a plan ready, in case Spider-Man shows up. (which he did) As Mysterio gives the green light for the plan to take action, one of the Maggia gang members 'die' at the hand of Spider-Man.

Capt Yuri Wantanabe ( the captain of the police force in the picture, and preview ) Insists that Spider-Man is innocent, even though Spidey himself is not so sure. Her reasoning, which is pretty good, is that she has just witnessed supposedly 'dead' men fighting Negative's undead gang members. Not being able to believe her eyes, she refuses to believe what she just witnessed Spider-Man do.

Carlie then appears, after her father mysteriously disappears. She looks at a corpse and states that she has seen the man's corpse before in the morgue.

Elsewhere Aunt May, now 'negatived' by Mr Negative, is giving poor Harry Osborn a hard time, who is still living in her house with Peter's cousins. In the meantime, Mr Negative too is giving Hammerhead a hard time. He reveals that he had secretly inserted an obedience disk into Hammerhead's rebuilt frame. He also spots the Spidey tracer that Spider-Man left on Hammerhead in the preview.

As if Spider-Man doesn't already have enough problems with the guilt of murdering one of the Maggia gang members, he falls into one of Mysterio's traps. Spider-Man bumps into more gang members, who after shooting and missing Spider-Man, all get killed by stray bullets! All except for one person who turns out to be the 'late' Captain Stacy.

Upon seeing his late girlfriend's father, Spider-Man takes out his rage on Captain Stacy and speaks to Mysterio, whom he knows by now, is behind it all. Spider-Man is later seen speaking with Carlie, who reveals that the man Spider-Man killed was not actually dead. Instead he had been given a drug to fake his death.

As the last scene of the issue we see 'Silvermane' discussing with the gang members to stash away all the money in one location. What a stupid plan. Anyhow, since Silvermane is the Don, no one dares question him... except for Carmine ( the only person who knows that Mysterio is controlling the Silvermane robot.)

Not wanting to blow his cover, 'Silvermane' then chokes Carmine to death. He then gives a warning to the rest of the members, reminding them that he is in charge of the organization.

Personal Thoughts
As mentioned earlier, this issue is absolutely fantastic. Art is good, and the story is excellent. The grand finale to this story will most likely end in the next issue since the cover shows Spider-Man breaking Mysterio's 'face.'

At this point, Spider-Man, unknowingly has a number of problems.


Look out for the next review in Amazing Spider-Man 620.

Other issues relating to this story.

What are they trying to say?

Sigh,
So there have been a couple of Deadpool Variants recently. See here. As we all know, Deadpool is pretty much the smartest person in the Marvel universe because he knows he is in a comic book. As such, he most likely knows everything that has happened - including mind-wipes.

So here is a Deadpool variant for Amazing Spider-Man 620, that would probably annoy some Anti One More Day supporters. 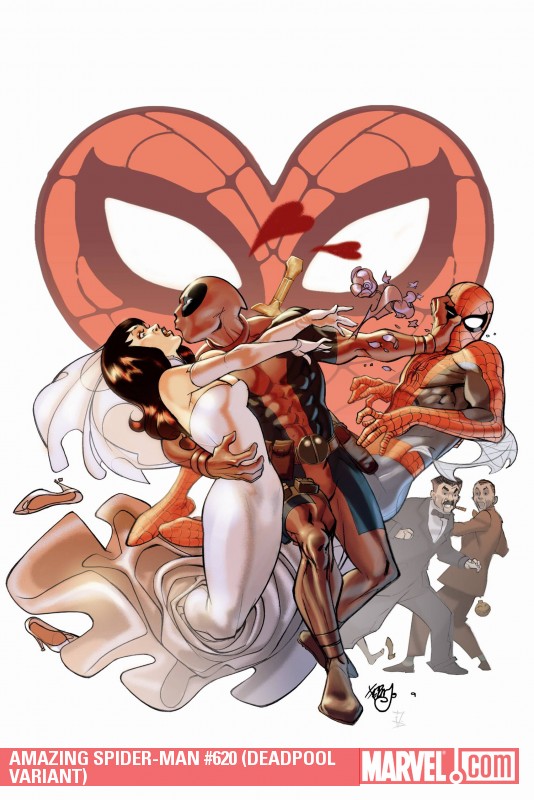 Personally, as a reader who was not all impressed with the One More Day storyline, this image reminds me that Marvel has not forgotten about the whole One More Day problem and hopefully will fix it up soon.

ps. Check out the weird looking Jameson in the background next to Harry.