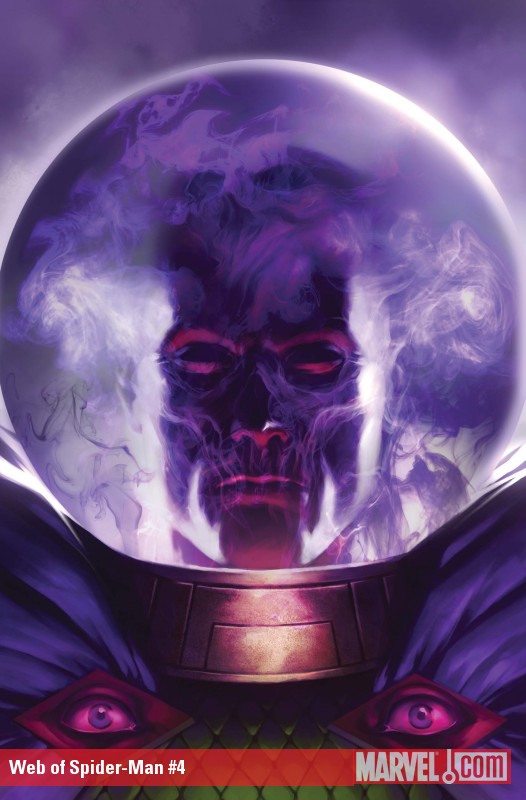 Web of Spider-Man 4 is contains three different stories. The first, which will be reviewed shortly, involves the unknown background of Mysterio. The second story involves Spider-girl, the daughter of Peter and Mary Jane, in an alternate universe.

The third story, although somewhat related to the current storyline in the Amazing Spider-Man comics, will also not be reviewed today. The third story involves some boring background information regarding Hammerhead in a terribly drawn story.


The story begins with someone talking to Mr Beck ( Mysterio ). Mr Beck states that he does not believe in the powers these 'Marvels' such as Dr Strange, as depicted in a newspaper article, posses. He makes it clear that he thinks it is all nothing more than a clever trick that an expert can easily.

As the story continues we find out that the person Mr Beck is talking to is his own mentor, an extremely skilled illusionist who uses his skills to engineer his plays. Beck refers to one of his mentor's more complex plays involving a 'demon' crawling on a wall. He asks politely if he could know the secret to that play. When declined, Beck releases some gas that causes his mentor to pass out. He then turns into Mysterio and searches the house for the secret.

Apparently, at this point, it is only this trick that makes his mentor the better illusionist. We find out that Mysterio has in his mind, a plan to frame Spider-Man. He plans to commit some crimes as Spider-Man to increase the reward for his capture by the Daily Bugle. Once the cash reward is high enough, he would catch Spider-Man and cash in.

Unfortunately, the only thing preventing him from doing this is the inability to crawl on walls properly. Mysterio later bumps into a demon in the basement. Using a couple of tricks up his sleeve, he manages to 'kill' it by springing his mentor's booby traps. The demon then disappears leaving Mysterio to conclude that it was another one of his mentor's ( Ray) greatest tricks.

Ray is later awakened by Dr Strange who calmly reassures his friend how he has dispelled the creature that tried to escape. Ray regrets ever turning to the dark arts for his movie effect. He also regrets not telling his protege ( Beck ) that it was never a trick at all.


Personal thoughts
Mysterio seems to be a little 'small' in his thinking here. With all the abilities he has, it is a wonder that the brightest thing he could think of doing was to frame Spider-Man and collect the meager reward from the Daily Bugle. Wouldn't it simple be more profitable to just rob banks using his skills?

The art for this story is fantastic. Colors, like the Electro Origins story is also outstanding. Not much as far as the story line is concerned. This is certainly an issue you could do without.