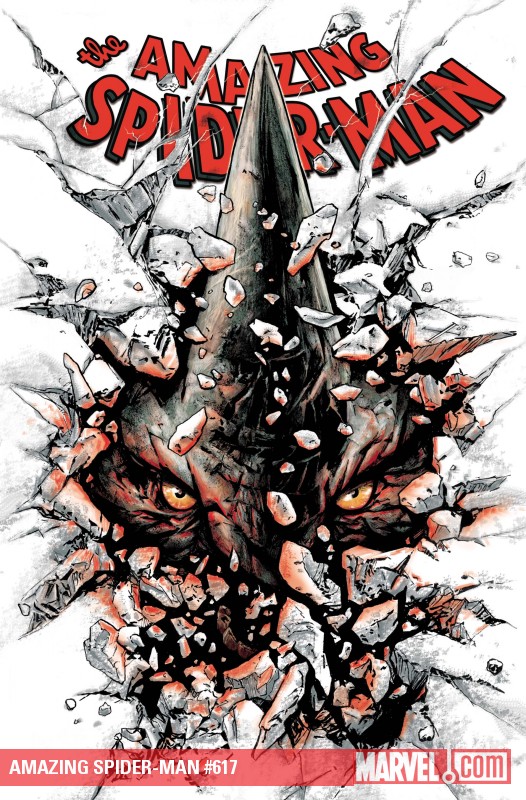 Amazing Spider-Man 617 was far above any expectations. Judging from the preview, the story did not seem all that fantastic. Similarly, the art, although not disgusting, was not impressive either. The finals stroke that caused the lack of expectation was the villain in hte issue - the Rhino.

As many can agree, the Rhino has never been the greatest threat, and like Electro, majority of his stories have not been too interesting. This story however is mind blasting, and is worth reading. The comic is split into two, related stories.

So, what is this story all about?

To save myself some time, I suggest you take a look at the preview for this issue before continuing to read.  The preview ends with Peter Parker having a nightmare and being told by Michelle that she forgot to wake him early as was asked to.

Spider-Man is then seen swinging in the cold, over what used to be the DB, to the Frontline ( his current working place. ) His boss, Ben Urich, offers Peter a full time job at the Frontline with a higher pay, due to increased business resulting from the destruction of the DB. Norah overhears the conversation and book Peter as her photographer.

Elsewhere the a figure shaped like the Rhino is seen staring at images of Spider-man fighting the Rhino. Over the phone, a person asks if he is ready to ascend.

Peter and Norah end up at a casino where Norah manages to win some big bucks. The relationship between Peter and Norah goes on as she constantly flirts with him as she has been doing in the past issues.

While at the casino, the two bump into the Rhino, without his suit. Peter learns that the Rhino, aka, Sytsevich, ( his real name) now works a decent job at the casino as a bouncer. As Peter ponders on how he can change to Spider-Man and keep Norah safe, another cool suited Rhino breaks into the building demanding a fight with Sytsevich.

At the right moment, Peter finds some space to get changed and interferes in the discussion between the two Rhinos. Annoyed that Sytsevich will not fight, he throws a live horse at him. The Rhino is then seen with blood and bits of horse all over his only good work suit. The new Rhino then walks off giving the old Rhino time to prepare and suit up.

After filing a police report, Sytsevich is next seen at nite preparing to suit up. Spider-Man, however is able to convince him not to. The story ends with the new Rhino furious that there was no fight between him and the original. It is later revealed that the person on the other side of the phone in this new Rhino's hideout is none other than the Kraven Family.

This story fills in the gap for readers wondering how the Rhino became good and found a wife. It is a simple, yet touching story. The Rhino essentially surrenders himself. His skin is then surgically removed by S.H.I.E.L.D. After pleading guilty to all crimes, he is sentenced to 25 years in prison. Due to extreme coorperation throughout his term, including not escaping when given the opportunity, he is released early, not even serving a fraction of his sentence.

His first stop outside of prison is a small restaurant where he meets a friendly waitress. The waitress explains how many convicts come to that restaurant and majority of them fall in love with her as she is the first women they have seen in years. Not wanting to hear anything about love, the Rhino leaves the restaurant.

He then tries to find an honest job, but fails miserably due to his criminal record. As he is about to resort to returning to crime, he sees the waitress who first served him at the restaurant. After s short conversation with the girl, he changes his mind about returning to crime and buys the girl some dinner.

Personal Thoughts
Overall, an awesome story line that was completely uncalled for. The issue could be a whole lot better with better art. In fact, I believe that it is possible to like Norah as a character, if it wasn't for the lame art in almost every issue she appears in.

Peter Parker's personal life once again becomes even more messed. Aleksei Sytsevich aka the real Rhino, has made tremendous steps to change since Brand New Day. Essentially, this is a great issue to the new year.