There has been some recent adjustments made to the template of this website to make it more user friendly. Props go to CahayaBiru.com for the help.

Some new features include:
Please leave comments on your first impression of the new layout. It would be most appreciated. 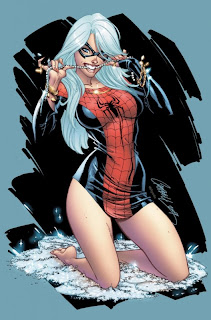 Okay, I feel like I'm the last person on earth to get a hold of this comic. But anyway, here is my review. Much to my disliking, the art changes halfway through the issue. The story is not fantastic, but the point is made. I rate is 5/10. There is no appearance of Mary Jane here, So do not be expecting it. This comic is kind of " not all ages" if you ask me. Apparently, Marvel is changing Spider-man's character since BND. (not to mention a bunch of other characters as well)
Amazing Spider-man 607 = a hot issue.
Depending on what you look for in ASM comics, it could be disappointing as well. I come under this category.


What happens in the issue? - the cover page is enough to figure out
Unfortunately, this whole issues is about nothing more than Spider-man getting laid, or should I say "Played". There is a small part of the extremely dumb villian from issue # 606 aka Diablo.

The first scene is of the two 'flirt birds' ( they are not love birds okay ) in bed. Apparently, the black cat told Spider-man she was gonna break into a hotel room, and asked him to come catch her. * how corny is that* I must admit that throughout this issue, she does have some pretty good lines ( all very suggestive) that explain clearly why Spider-man is crazy about her.

We all know that Cat does not want to know Spider-man's identity this time. As such, they have sex in pitch dark, in a hotel room that we later find out belongs to some "newly weds." Felicia promises not to look at his face. 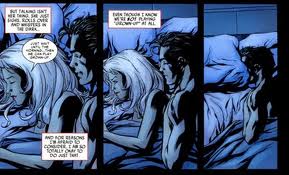 Spider-man later checks up on Bennet and learns who the dead guy in Bennet's place is. (issue#606) Black Cat and Spider-man track down Diablo, who's master evil plan I will not mention, partly because it is so stupid.I keep laughing at every time I think about it.

ps. I think Diablo was just inserted into the issue so there would be some kind of story to it besides "Black Cat wants Spider-man."

We do learn that Mrs. Kraven the hunter is going to play an interesting role in time to come. This would be the second time she is approaching a villian at the end of the issue, the first being Chameleon in # 604. She is definitely cooking something bad for spider-man. It would be interesting to see what is in store.

The real moral of the story is Spider-man is back with the Cat for lotsa sex, more than once a day, as we can see from the scan below. 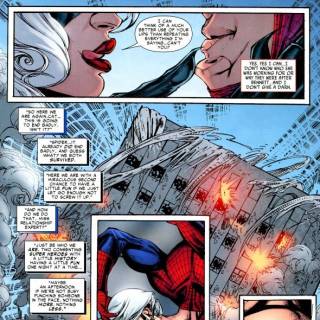 Personally, I know this relationship can't last. I give it 5-6 issues, and I'm being gracious. Peter is making a huge mistake, and I am not particularly a fan of what is taking place in the ASM comics. For one thing, she is hiding some important facts like - who she's working for. The image above explains everything. Including Peter knowing he is in for some bad news soon.

I would have been extremely disappointed in this comic if it were not for this scene below in issue # 605, that was most disappointing. 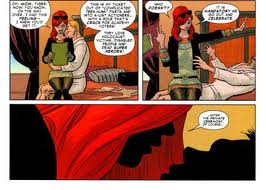 I strongly support the Peter/MJ marriage, and this is not how I was hoping things would turn out. But for those who like this kinda thing, go get yourself an issue!

Looking forward to review the Clone Saga # 1, in which Peter and MJ are married. As soon as I get my hands on the comic..