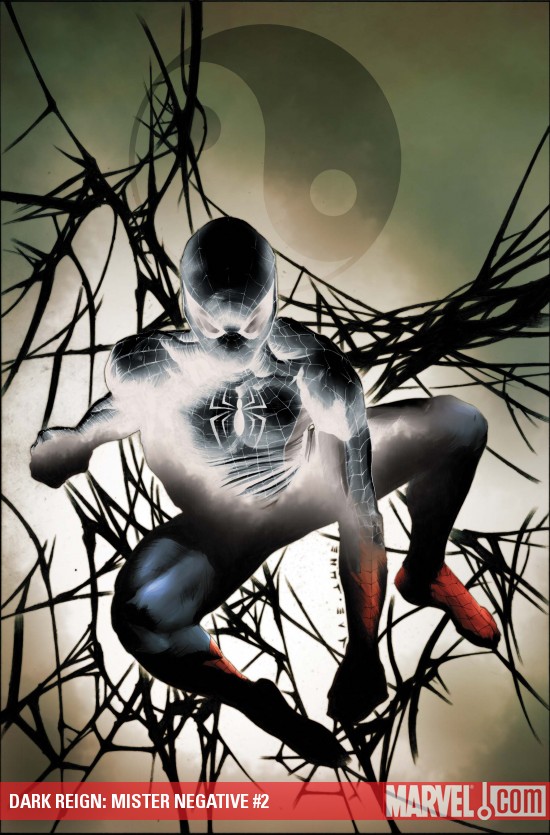 Dark regin: Mr Negative # 2 reveals more important information to the background of Mr Negative and what his 'evil touch' actually does to a person.

The story starts exactly where it ended in issue # 1.
In this comic we get to understand what actually happens to a person who has been "negatived."
It starts with Spider-man doing his usual " My name is Peter Parker" thing.

Apparently, after being touched by Mr Negative, Spider-man's entire perception of his life has changed. He not only is following orders from Mr Negative, but has also become the opposite of what he stands for.
As we can see, Mr Negative's touch can be pretty messed up. While Spider-man is busy fighting the hood's gang members, Hammer head is given the task of sending a delivery to "someone"

In the mean time, Betty Brant discovers more curious information regarding Martin Li from Mrs Li, who in turn runs off upon the mentioning of Mr Negative.

Coming back to Hammer head, we next see him ramming into Norman Osborn's office - obviously to pass the package given by Mr Negative.

The story ends with Betty Brant chasing Mrs Li, who is heading for Mr Negative. Mr Negative then orders Spider-man to kill Betty.


The last scene is that of Mr Negative preparing to fight the Hood himself.

As most people who follow comics will know, Marvel's current biggest story is the Dark reign series in which Norman Osborn aka the goblin is has control in the Marvel universe. He has a team of super powered, Dark Avengers, very similar to the real Avengers.

Mr Negative is actually one of the newer bad guys whose history is has not yet been revealed in Dark Reign: Mr Negative # 1. The last we see of him is in one of the earlier issues after Brand New Day.

To make it simple, Mr Negative has a dual personality ie Martin Li ( a good guy) and Mr. Negative ( bad guy). Mr Negative's powers, as we can see from this issue, is to bring out the worst in a person.

The comic begins with Mr Negative receiving a threat of some sort from some clown called White Dragon stating that this Hood character was taking over Mr. Negatives territory - Chinatown. Mr. Negative, with a powerful touch of his hand, brings out the 'negative' side of the White Dragon. The White Dragon, now black in color ( after being negatived ), is under Mr Negatives power and is sent back to the Hood's hideout. The hood later shoots the White Dragon to death ( so much for him)

The next scene involves Betty Brant doing her reporter job. She has been sent to dig up something negative about Martin Li. Later, the Hood's gang indeed comes to take over Chinatown. While this is taking place, Peter receives news that Martin Li may be in danger.

In all his good efforts, Spider-man tries to help Martin Li, only to find himself 'touched' by Mr Negative and have the worst brought out in himself. Spider-man is used like a puppet to fight off the Hood's gang members.

If there is anything you get out of this review, it is this:

Read about other related issues: