Okay,
I'm not any professional reviewer like IGN or Newsrama.com, but I will give my share of what how I find the latest development of Spider-man in this issue. appears

The Issue starts off with Doc Ock visiting a Doctor I think. Ironic. It appears he ( or his mind at least) is degenerating due to the numerous punches he's received from super humans like Spidey of course. As such, he prepares his last stand against the world, or just New York. This is just another filler in the comic if you ask me. Reason being that there has been no build up to Dr. Octopus at all in the past issues. Thus everyone reading will know that, unfortunately for him, his brilliant evil plan is nothing more than a filler in this comic to prepare for the real deal, - ie. Aunt May's Wedding and the return of Mary Jane.

Dr. OCK : Poor guy. He's always portrayed as a class C bad guy, just a little better than the Rhino, never a real threat. I'll never understand why he was chosen for the movie. We all know Spidey is gonna win in before the end of this issue.

Aunt May: Is getting married to Jonah Jameson SR! I do not agree, but oh well, leave it to marvel to do what they want. Apparently, in the issue she gets her 'blessing" from Uncle Ben

Mary Jane: Ive been waiting ages for her to get back in the picture. But from her first appearance it is clear that Marvel is changing her character. No longer the supportive caring, character. From her only appearance in the issue looks to me like shes back as her 'wild, careless, self.'

We're gonna just have to wait and see whats coming next.

Below: My favorite line in the comic as the thug tries
to fight daredevil

About Spider-Man Reviews: In layman's terms
Started in Sept 09, this site was designed for people who wanted to know about Spider-Man's recent stories, but were too lazy to get the comic.

Back then..
In all honesty, this site was originally created to record the developments in Spider-Man comics hoping that the after effects of  the controversial storyline, "One More Day," would fix itself.

Amazing Spider-Man #600, which was our first review, marked the first appearance of Mary Jane since "Brand New Day" - the event after "One More Day." (These guys just have the most interesting titles)


What did you just say, and what's up with the "...days?"
For those who do not know Aunt May was shot as a result of Peter Parker's identity being exposed during Civil War. In his trauma he makes a deal with Mephisto, (the devil guy) to exchange his marriage with Mary Jane in return for Aunt May's health.

The events above took place in a comic called 'One more day.' The following issues, titled 'Brand New Day,"  follow Peter Parker, with a healthy Aunt May and a missing Mary Jane, up till issue 600.

As a half hearted Spider-Man fan who wished there was a website to read about what was going on in the Spider-Man comics without actually having to buy the comic, I decided to start Spider-Man Reviews to target other lazy readers like myself, and in doing so, became quite the comic fan myself. 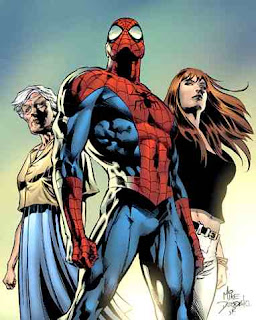 Today..
While initially run by one person reviewing only the Amazing Spider-Man comic, today, Spider-Man Reviews tries its best, with the help of our volunteer reviewers, to review all current comics featuring Spider-Man ( If that is possible).

Other Spider-Man related articles appear under our "more comic stuff" tab, including news, thoughts, and the like. Spidey Classics are just reviews of old Spider-Man issues/ arcs, and game reviews are some game reviews!